October 28, 2014
Davao's Manic Nightnings Productions is throwing a big party in November. Dubbed as Carte Blanche : Electric Music Carnival, it is an electronic music dance festival which will take place at the Crocodile Park Concert Grounds on November 15, 2014. It is expected to attract more than 20,000 party goers from Davao City and nearby towns and cities. It is something to look forward to, so mark your calendar and be a part of Carte Blanche 2014. 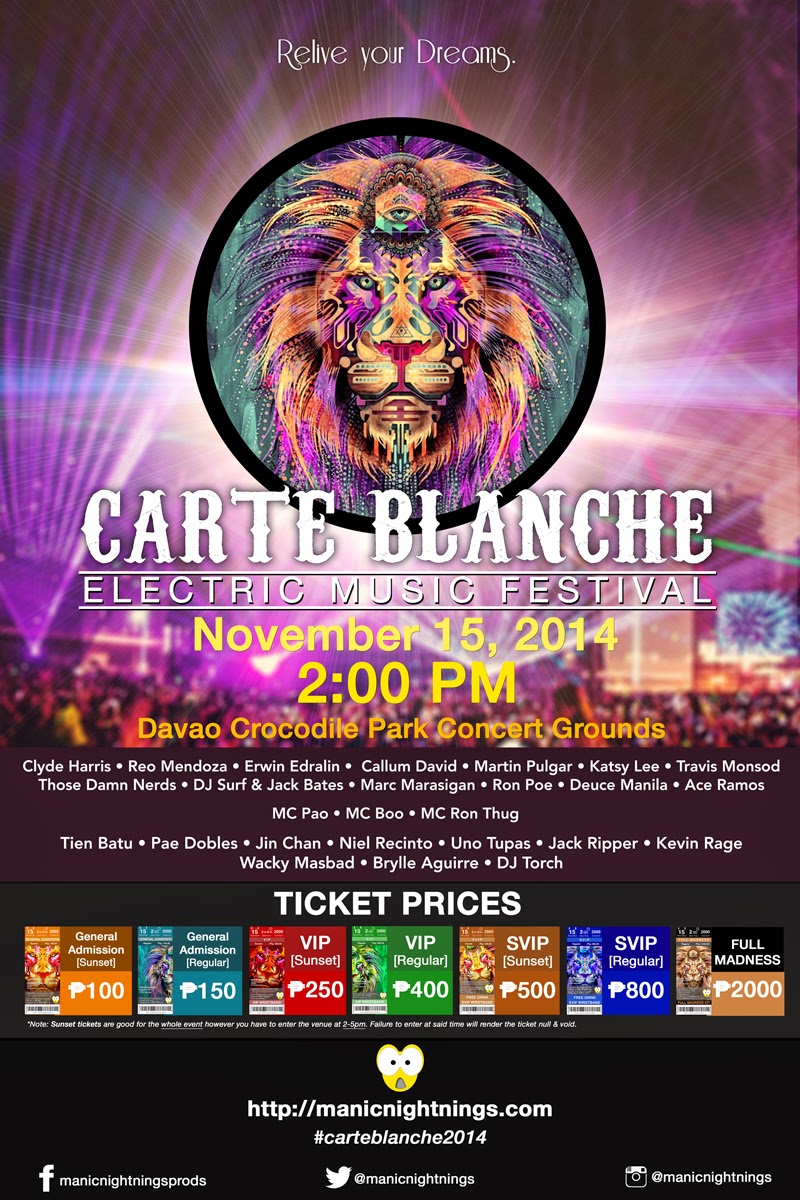 This year’s Carte Blanche is envisioned to be bigger and better than last year. There will be two large fields at the concert grounds - the Carnival, with carnival rides and photo booths and the Rave field where all the dancing and partying will take place.

This year’s lineup of DJs will be as big, if not bigger, as last year’s. The musical styles will be as varied as the carnival colors. House music from Clyde Harris, Reo Mendoza and Erwin Edralin. Tech and techno beats from Callum David and Martin Pulgar. Trap, dubstep and a mix of everything else from Mark Nicosia, Mia Ayessa and Regina Reinoso collectively known as Those Damn Nerds. And all the anthems and big room festival sounds from DJ Surf & Jack Bates, Marc Marasigan, Travis Monsod, Deuce Manila, Ron Poe and Ace Ramos. Davao’s very own DJs will complete the lineup - Tien Batu, Pae Dobles, Jin Chan, Niel Recinto, Uno Tupas, Jack Ripper, Kevin Rage, Brylle Aguirre, Wacky Masbad and DJ Torch.

The hype will be kept going by three of the best MCs in the industry - MC Boo, MC Ronthug and MC Pao.

Carte Blanche’s gates will open at 2PM. The music will also start at the same time.

For more information, you may visit the event page at: http://bit.ly/CarteBlanche2014 or follow Manic Nightnings Production at https://www.facebook.com/MANICNIGHTNINGSPRODS
Davao City Press Release