Mobile leader Smart Communications (Smart) led private sector support for the 31st Kadayawan Festival, which came at the heels of the PLDT wireless unit’s announcement of its plans to accelerate its LTE deployment and other network improvement initiatives in Davao City. 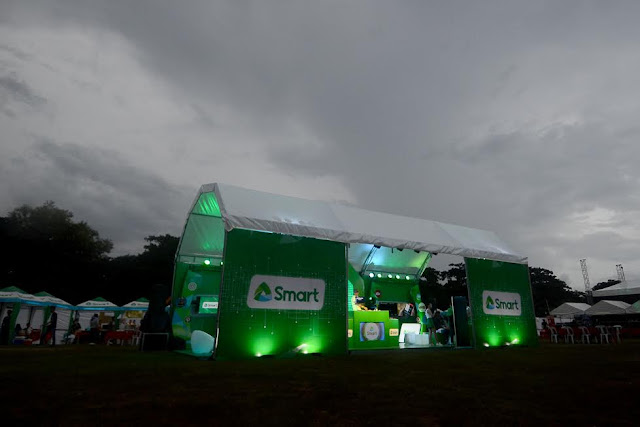 Visitors who flocked to Davao were among the first to enjoy the treats prepared by Smart to celebrate the festival, as Smart booths at the Francisco Bangoy International Airport gave out Philippine eagle plush toys and Kadayawan map-postcards to tourists who purchased Smart pocket wifi devices and prepaid credit packages.

Seeing the city’s need to accommodate higher tourist arrivals, Smart ensured its mobile data network was fortified in the home of the country's president, as it offered prepaid and postpaid subscribers a generous data package so that they could share their Kadayawan experiences online.

During the opening ceremonies of Kadayawan, Art Boncato, co-chair of the executive committee of this year's celebrations, lauded the support of the private sector.

He said that the support of Smart contributes to the great success of Kadayawan.

“The contributed efforts of the private sector are really indications of an engaged society,” he said. “The returns of the investment that they put in can’t be measured against the wonderful outcome and the results of people coming together as one.”

Boncato said that unity among different industries shows that there is “love” to make the places where they operate a valuable tourism destination.

The tourism officer also lauded the effort of Smart to make internet accessible to more people and tourists. “Connectivity is crucial to the pursuit of success,” he said. “People coming together in events like Kadayawan is always a moment worthy of capturing and sharing. This showcase of Davao to the world makes the destination even more attractive to travellers.”

The events of the Kadayawan—from street parties to bazaars and concerts—drew strong crowds in different parts of the city, adding festive vibes from morning until midnight.

Smart also supported the Great Kadayawan Trade Fair and Bazaar at the Davao Convention and Trade Center. The bazaar returns this year with its biggest installation yet; it featured over 200 booths that carried a wide range of products and services.

During the bazaar, Smart mounted the Smart Zone where subscribers were offered free charging in stations, alongside games and interactive booths like the karaoke challenges by Smart Music Live.

Creativity of subscribers were highlighted in Smart's Own It Launchpad Upload station. The station allowed them to record and upload for chances to collaborate with international YouTube starts and Samsung gadgets.

“The Great Kadayawan Trade Fair and Bazaar highlights exciting products, services, and food offerings in every visitor’s experience,” Boncato said. “The collective Kadayawan vibe in the bazaar is imprinted in every booth and makes trips to the event memorable, transforming retail experiences.”

Visitors of the bazaar who posted in social media using #SmartKadayawan and #SmartDavCon were given special prizes and tickets to Spectrum Philippines' Invasion concert series in Davao.

The Smart Dome in the Kadayawan Invasion concert in the Crocodile Park grounds upped the fun with face painting, do-it-yourself bracelet activities and virtual reality booths.

Partygoers were also able to live come up with jams in a DJ booth, making the Invasion party a night to remember, and the Kadayawan weekend worth remembering.