PLDT Home remains undisputed as the fastest broadband network in Davao City, dominating telco rivals with top upload and download speeds of 70.06 Mbps and 71.50 Mbps respectively, according to the Ookla® Speedtest Awards™ Q3-Q4 2021. 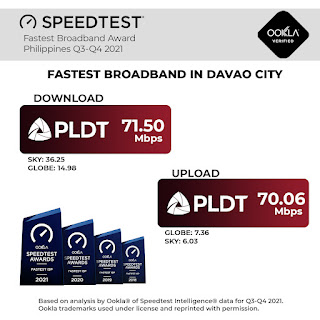 The Ookla® Q3-Q4 2021 data also showed PLDT garnering an overall nationwide speed score of 77.24, which is a huge jump from its speed score of 27.28 in the second half of the previous year. Speed Score is a measure that takes into account both upload and download speeds. 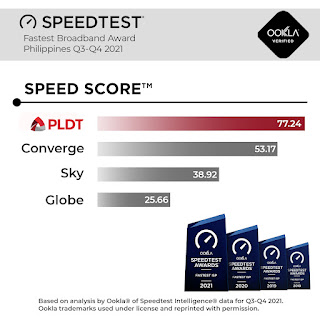 PLDT Home’s speed leadership in Davao City enables it to thrive in economic activities that leverage work-from-home productivity. This includes remote work, virtual schooling, and remote entrepreneurship. As part of its commitment to its subscribers affected by the recent Typhoon Odette, the telco giant has already restored 99% of its fixed line services in Mindanao.

“PLDT is relentless in its mission to provide key Philippine cities like Davao with the fastest and most superior home internet services, to help accelerate their economic success. The increased demand for the fastest broadband in the country remains strong and we’re investing as well in our capabilities to install, upgrade and repair so that our customers in Davao enjoy better digital life with future-ready homes,” says Butch G. Jimenez, Jr., Senior Vice President and Head of PLDT Home Business.

PLDT’s speed dominance in the country has been consistently recognized by the Ookla® Speedtest Awards™ having swept the fastest broadband award in all the quarters of 2021. To find out the network speed of ISPs, Ookla® compares data gathered from millions of consumer-initiated tests taken on Speedtest® platforms. The data include tests done by Filipino internet users on various networks using digital devices connected via Wi-Fi and fixed networks. Each top carrier accounts for at least 3% of the sample size in the geographic area.

In the second half of 2021, PLDT Home launched its biggest speed upgrade for customers with thrice as much speeds versus the previous broadband plans. In November 2021, PLDT Home launched the country’s first-ever 10,000 Mbps fiber-optic service in the Philippines, putting the country alongside first-world nations that have access to such ultra-fast home internet speeds such as South Korea, Japan, Sweden, Norway, Italy, New Zealand, and USA.

Entertainment and Security services bundled with its flexible broadband plans.

743,700 kilometers, extending its reach to 13.9 million homes passed, and with over 5.77 million fiber-powered ports.

To date, PLDT Home has connected over 3.6 Million subscribers, proving to be the most trusted telco of Filipino

families for fast internet speeds for work at home, online school, and family entertainment at home amid the

prolonged COVID-19 pandemic in the country.

Disclaimer: Based on analysis by Ookla® of Speedtest Intelligencdata Q3–Q4 2021. Ookla trademarks used under license and reprinted with permission. 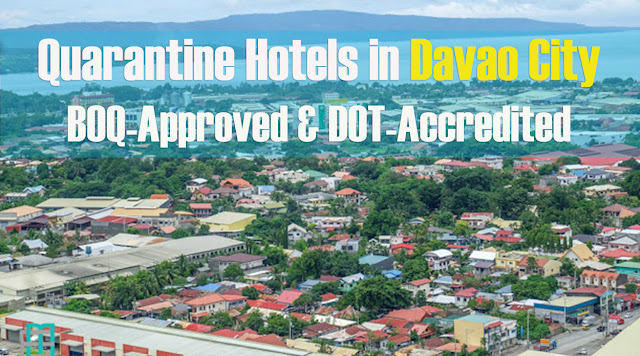 Are you a returning Overseas Filipino Worker (OFW) on a repatriation flight to Davao City? If you are an OFW, you should not worry, you are covered by Overseas Workers Welfare Administration (OWWA). But. if you are a non-OFW returning Filipino, you will have to book your accommodation for the 14-day mandatory facility-based quarantine.  To help you decide where to stay, we listed the quarantine hotels in Davao approved by the Bureau of Quarantine (BOQ) and accredited by the Department of Tourism (DOT). Most of these hotels are listed in Agoda so you can easily book your stay online.  To give you an idea of the cost of quarantine, we also listed the room rates. Please take note that you may need to pay extra for the cost of the full board meals. Outside food delivery is NOT allowed so you will have to get your food from the hotel. Quarantine Hotels in Davao City Seda Abreeza Hotel Address: J.P. Laurel Ave, Poblacion District, Davao City, 8000 Davao del Sur Phone: (082) 244 3000 Room rat
Read more